We all know that there are different types of stud finders in the market that can locate the metal studs and plumbing.
But the walabot DIY plus stud finder is the modern stud finder as it is a superior tool to find any types of metal
1.studs
2.wood studs
4.wires
5.Pipes
6.Electric cables.

The good thing about walabot stud scanner is that it will give you the accurate and precise results.

One of the unique features of walabot stud finder among all other stud finders in the market is that it can detect and track the rodents and pests etc. It can locate the studs up to 4-inches into the walls.

It works when it is paired with an android phone. Furthermore, You can see the visual image where it can also find the studs in the drywall, lath, and even the plaster up to 4 inches deep. 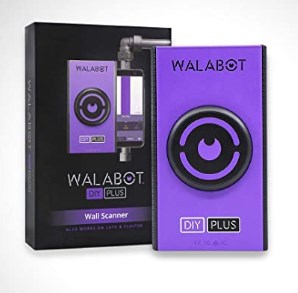 It is considered in the category of the most advanced stud sensors where it has developed technology, which is perfect for DIYers.

Walabot has Two Types of Modes:

There are two types of modes in the Walabot stud finder. So, it is a multimode stud finder.

So, with walabot image mode, it will provide the real-time images inside the walls when the walabot device passes over the wall or any other place. The items which are detected are color-coded and labeled so that you can quickly identify it whether it is the wood stud, metal stud, wire, or pipe.

This is one of the unique features of walabot stud scanner that it has the expert mode. With the help of expert mode, you can detect the intersections of wires, studs, Pipes, and much more.

Moreover, It is an incredible tool to follow the path of the object. Now, you can also track the movement on your wall. When it detects the movement, then it is the indication of any household pets. So, you can quickly determine the location of troublesome household pests.

Which things do you require while using walabot stud finder?

When you purchase the walabot DIY stud finder, then there are five things in it.

The electronics and walabot DIY sensors are enclosed in the black plastic sheets. It has a foam factor that is similar to the standard backup battery. A circular magnet is present at the back of the DIY sensor and is embedded in the plastic casing.
Then this DIY sensor has stuck to the back of your android smartphone.

Although, Both the stud scanner and the android phone are connected through USB wire.
There is a magnetic connection between the metal disc and the sensor, which could be more reliable.

How to use walabot stud finder?

When you start your project and have walabot DIY Plus stud finder than simply put it on the required area on which you have to do the work: Now, you can locate the number of the stud which are needed to hang any object. When you find the stud, then mark the location of the stud with the pencil. After marking you can proceed with your project.

So with the help of walabot stud finder, you can accurately hang the pictures or add the shelves.

You can also mount the TV with complete confidence with the walabot stud finder.

The nest feature of Walabot is you can see what is Behind your Wall.

You can use the image mode and hold the walabot against the wall, then calibrate and scan the wall.

All this can be possible with Walabot radio frequency technology. So it can detect and analyze the objects through artificial intelligence.

The results will then shown in the form of images that you see in the way of metal studs, pipes, wires, and wooden studs.

There is no chance of mistake when you are using walabot stud find. With this app, you can see the pipe studs, wires, beams, and much more behind the wall. Walabot stud finder app is also the good one in finding the stud very quickly and accurately.

We can even say that it is a mediocre electronic stud finder which needs semi-dedicated Android smartphone to find the metal studs, wood studs, and wires.

You can install any of the metal detectors or the stud detector app, such as the walabot stud finder app on your Android mobile, but unfortunately, it will not support any of the iOS devices.

You can detect the edges of the studs by using cutting-edge radar technology. It can see inside the walls and also find the electrical wires in the walls.

The detection of the PVC pipes and metal pipes can be possible where it provides you the 3D visual image. The amazing feature of the walabot stud finder is that you can also see through insulation and also through the drywall.

Q 1: Can we use walabot stud finder inside the Palm or bugs inside a tree?

Ans: No, unfortunately, you will not be able to use this stud find the inside the Palm or inside a tree. This is because it is designed to use on flat surfaces such as drywall or solid concrete.
It will not work on non-flat surfaces. It can detect the studs on flat surfaces of 4 inches in depth.

Ans: Yes, you can use the walabot stud finder on an insulated wall. It can detect the metal studs, wood studs, and wires very easily with fiberglass insulation.
Make told that you have done the calibration into the walls when you are scanning.

Q 3: Can we use the walabot stud finder on vehicles to find the disconnected wire?

Ans: No, unfortunately, you will not be able to detect the disconnected wire through any type of vehicle.

And this stud finder will not work on metal, and it requires a flat surface so that it can scan correctly and find the stud. So we have come to the conclusion that it will not work accurately on vehicles.

Walabot stud finder is superior to other stud finders available in the market because it is the advanced stud finder and can detect the studs by connecting it with Android mobile.

The unique feature of walabot stud finder is that it can also detect the pests and rodents. You can also see the clear picture of any type of stud while scanning, which makes it unique to other stud finders.